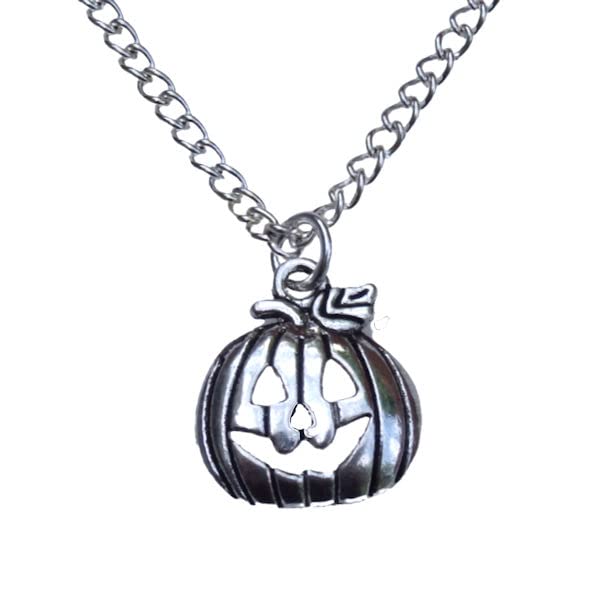 Silvertone Jack O’Lantern pendant necklace, according to the legend below, Jack OLantern was a man not a pumpkin. Jack O’Lantern charm 0.6 inches x 0.7 inches (15 cm w x 18 cm ), silvertone metal alloy Necklace: 18 inches (45 cm) silvertone chain 2 inches (5 cm) extender chain Adjustable to 20 inches (51 cm) Secured with a lobster claw clasp Handmade necklace. Jack-O’Lanterns have been a Halloween tradition since the beginning of time. An Irish legend about a guy known as “Stingy Jack” is said to have inspired the practice. Stingy Jack allegedly requested the Devil to join him for a drink. However, stingy Jack, true to his moniker, refused to pay for his drink, so he persuaded the Devil to transform himself into a coin so that Jack could pay for it. Because of Jack’s determination and the silver cross he carried in his pocket, Jack could save the money and prevent the Devil from returning to his natural form. When Jack finally freed the Devil, he made him promise not to disturb him for a year and not to claim Jack’s soul if he died. Next year, Jack fooled the Devil into climbing a tree to pick a piece of fruit. The Devil couldn’t come down from the tree until Jack told him that he wouldn’t trouble him for another ten years while he was up there, carving a cross into the bark. Jack died not long after that. According to folklore, God wouldn’t let such a despicable man into heaven. Angry at Jack’s ploy and upholding his promise not to claim his soul, the Devil refused to let Jack into hell. That little coal was all Jack had to guide him in the pitch blackness of the night. Since then, Jack has been traversing the Earth with a carved-out turnip full of coal. When this ghostly figure was first called “Jack of the Lantern” and then “Jack O’Lantern,” the Irish referred to him as such. Color viewing can differ with the browser and monitor used. OurJjack O’Lantern pendant necklace is boxed, wrapped in a colorful organza bag, and bagged in plastic. You